Cowboys’ quarterback out: What happens next? 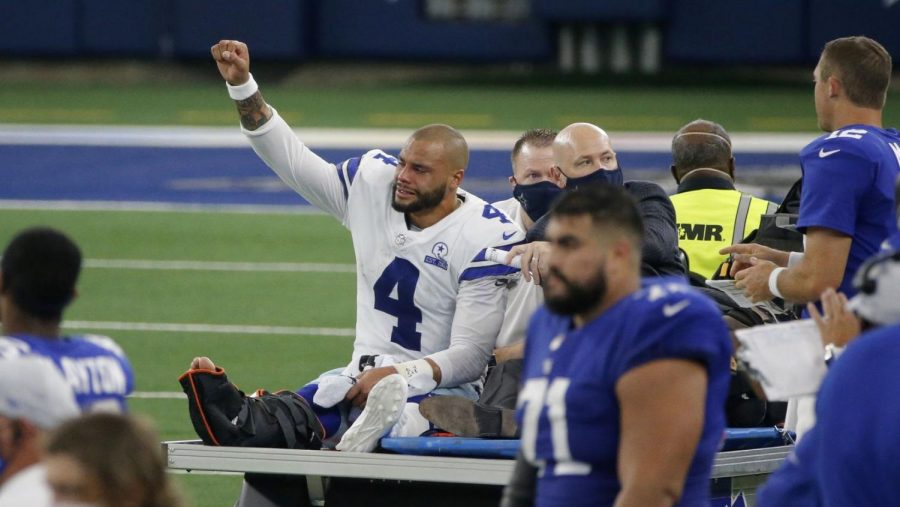 Dallas Cowboys quarterback Dak Prescott (4) lifts his fist to cheers from fans as he is carted off the field after season ending ankle injury.

On Oct. 11 2020, Dallas Cowboys’ quarterback Dak Prescott suffered a compound fracture and a dislocation in the right ankle in their game against New York Giants which they managed to score a 37-34 win off of. With such a major injury, Prescott’s 2020 season came to an end. Prescott had a successful surgery the night of the incident and according to CBS Sports, the injury is not considered career-threatening and the predicted recovery time for Prescott is four to six months.

Prescott was statistically having the best year before he got hurt. According to CBS Sports, ”Prescott was on pace to shatter the NFL‘s single-season passing yards record (5,477), which Peyton Manning set in 2013 as the Broncos quarterback.” Going into Sunday’s game, Prescott was projecting 6,760 passing yards for the season and also completed a career-high 68 percent of his passes in the five games he played.

However, Prescott remains unsigned beyond the 2020’s franchise tag of $31.4 million dollars. Even though the sides have been unable to come to terms for a long-term contract, Cowboys owner Jerry Jones hinted that, “he expects the pending free agent and two-time Pro Bowler to return to Dallas next season,” according to the New York Post.

“We are all heartbroken for Dak and this very disappointing injury,” Jones said in a statement. “The outpouring of messages that I have received regarding his setback speaks volumes to the respect and admiration that he has earned from his teammates, former Cowboys players, and Cowboys supporters everywhere and we have no doubt that he will return to the position of leadership and purpose that he brings to our team.”

The fifth-year quarterback who came out of Mississippi State was injured on a scramble and was carted off the field in tears in the 3rd quarter against the Giants on Oct. 11 2020. Veteran backup Andy Dalton led the game-tying and game-driving wins which ended the Cowboys with a victory that night and Cowboys’ fans hope that Dalton can keep the Cowboys on a winning streak for the remainder of the NFL football season.