How Trump’s hospitalization shapes the election 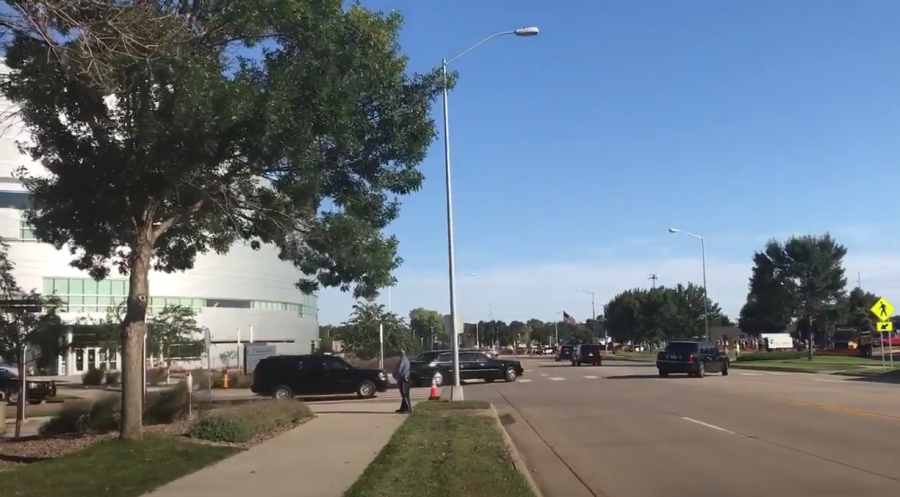 President Trump visited Sioux Falls on Sep. 7, 2018, in the same motorcade used for his recent drive-by outside of Walter Reed Medical Center.

President Trump’s Oct. 2 announcement that he tested positive for COVID-19 seems to have many implications for the upcoming 2020 election.

A signature component of Trump’s campaigns in 2016 and 2020 is the rally. According to Trump’s campaign manager Bill Stepien, “All previously announced campaign events involving the President’s participation are in the process of being moved to virtual events or are being temporarily postponed.” But how effective even are rallies? While there is some dispute, most studies tend to agree that rallies have no direct and significant impact on voters’ preferences; rather, they indirectly create a volunteering fervor among the base of people already supporting them, which can sometimes influence those whom they canvass. Therefore, Trump’s temporary campaign trail absence might diminish his ground-game, but it likely will not influence the polls.

Pence, meanwhile, will continue to campaign on a standard schedule. While Pence’s favorability spread, according to RCP, is at -7.5, Trump’s is at -12.6; therefore, Pence’s campaigning for Trump probably will not do much for the base (who are all but certain to vote for Trump anyway), but it might make a small impact among swayable or undecided voters. Another factor to consider is sympathy, which could temporarily increase Trump’s favorability. However, as Cailin Birch told CNBC, because “the U.S. political spectrum is just so deeply polarized and entrenched,” sympathy is unlikely to significantly change the race.

Two other conservative world leaders who had COVID-19 are British Prime Minister Boris Johnson and Brazilian President Jair Bolsanaro. Bolsanaro’s relatively non-severe case reinforced his narrative of downplaying its severity. His approval increased slightly, according to Datafolhna. This is most attributable to his consolidation of support among his evangelical Christian base. According to YouGov, Johnson, who had a near-fatal case, experienced a brief bump in support, but this soon dissipated. Trump, in the at-risk category, might experience something similar, though it is important to note that the U.K., while still divided, is far less divided than the U.S. Thus, national unity via ‘sympathy points’ will be less prevalent in the U.S.

Domestically, several governors have contracted COVID-19, perhaps most notably Oklahoma’s Kevin Stitt. In one poll which measured support for how he handled the pandemic, support went from 45 to 34 percent after his diagnosis. This undermines Trump’s COVID-19 downplaying; there are surely other factors at play here, though. Other governors who have or had COVID-19, such as Ralph Northam of Virginia, did not experience such a drop at all. Local issues specific to those states are likely the biggest reason for the drop or stability in approval ratings.

Right before Trump announced his test result, on Oct. 1, former Vice President Joe Biden announced he would resume in person canvassing in battleground states. Given that canvassing is, according to the Cooperative Congressional Election Study, the most effective method of voter outreach, this could be a major boon for him—even though he is already ahead. But because Biden ceased canvassing up until now, he has much work to do catching up to Trump’s touted door-knock numbers, as Politico reported. Biden’s cessation from canvassing was a tactical decision, made in the hopes that voters would see him as taking the pandemic more seriously than the president. While the upcoming surge of Biden canvassing might help his campaign, the same principle holds true for both him and Trump: canvass conversation quality ‘trumps’ door quantity.

The status of the remaining two presidential debates, scheduled for Oct. 15 and Oct. 22, remains dubious. It is very likely that, following CDC health guidelines, the Oct. 15 debate will be cancelled or postponed, as it is only 13 days after Trump’s announcement. The Oct. 22 debate remains possible, but given that 69 percent of the first debate’s viewers said they felt “annoyed” at the debate, the debate will probably be not productive. Trump, who trails Biden by 8.3 points according to RCP (a 2.2 point increase since before the debate), clearly needs the debates more than Biden does. One post-debate poll by NBC showed Biden 14 points ahead of Trump! Yet if it comes down to it, the President will surely be reluctant to have a virtual debate, as it gives much more control to the moderators.

The vice presidential debate, scheduled for Oct. 7, is more likely to occur, since both Harris and Pence tested negative. But its status is still uncertain. Even if all scheduled debates did occur, it is unlikely to change much. As Harvard Business School Working Knowledge noted, debates have a “negligible” effect on a voter’s choice. Both campaigns might now have to rely more on television ads, and Biden recently indicated, without reciprocity, that he would pull negative ads.

Another confounding factor here is if Trump becomes incapacitated, resulting in Vice President Pence becoming (acting) president. Should Trump’s case be fatal, the newly sworn-in Pence would try to move quickly in getting his VP nominee approved by both houses of Congress, while also avoiding a Constitutional succession crisis. Few polls have been conducted pitting Pence against Biden, but an Emerson University poll in Ohio, a key swing state, indicated that the state would support Biden over Pence 54 to 46 percent. This is very similar to the previously mentioned lead Biden has over Trump, even though Trump’s and Pence’s bases (rural whites voters and evangelicals) are different. This suggests Trump’s absence would change little.

Finally, Amy Coney Barrett, Trump’s nominee to replace Ruth Bader Ginsburg, was supposed to have a hearing coming up. But due to the positive tests of two Senate Judiciary Committee members, this might be delayed. While Lindsey Graham, the Committee’s Chairman, has indicated there will be no delay, many Democrats are calling for one so the hearing can remain physical; this could slow things down enough that, if Biden wins, he would end up nominating the next justice.

While in the short term, there might be some changes in Trump’s approval, when we consider the big-picture from now until Election Day (especially given how many have already voted), it seems very little will change after all.