The British spill ‘tea’ for a second time 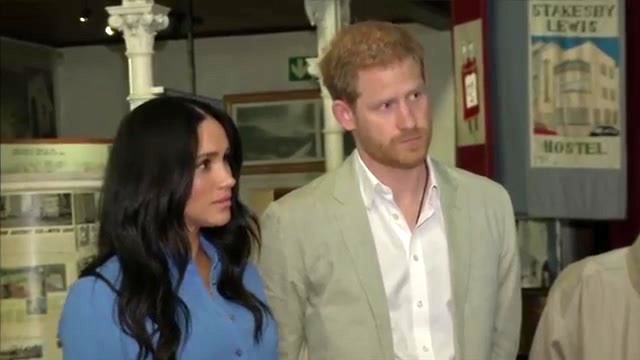 Duke and Duchess of Sussex, Prince Harry and Meghan Markle

The whole world was stunned on March 7, 2021, when the Duke and Duchess of Sussex, Prince Harry and Meghan Markle opened up to Oprah Winfrey in an interview about the truth of the royal family. On Jan 8, 2020, the young couple decided to step back from the royal family while continuing to support Her Majesty the Queen. Hearing this news naturally raises suspicion and can make anyone wonder the reasoning and motivation for the couple to leave the family. Winfrey touched on topics during her interview that would seem impolite to ask about amongst the royal family which has a large stigma.

Markle begins her interview explaining to Winfrey how the royal family is completely different than perceived, how citizens or followers of the royal family can only make assumptions by what they are presented with and not the actual truth. Even before meeting the Queen privately, Markle was still expected to curtsy, which took her by surprise.

Winfrey touches on the topic of Markle’s relationship and comparison with her sister-in-law: Kate Middleton, the Duchess Catherine of Cambridge. Markle was looked down upon by the media, giving her the name ‘Hurricane Meghan’ for the same things Middleton was praised for. After the couple tied the knot, headlines were made that Markle made Middleton cry over bridesmaid dresses and in the interview, the audience learns the exact opposite. Markle tells Winfrey that the Institution did not do anything to stop the false story from spreading and that was a turning point for Markle. Outside of just that instance, Markle reveals that she received very minimal protection and that other members of the family were lied to while the truth was not told to protect her.

“I know there’s an obsession with how it looks but has anyone talked about how it feels? Because right now I couldn’t feel lonelier,” said Markle.

To bring even more surprise to the interview, Markle and her husband reveal that they were told before their son was born that he would not receive security or a title, which was going against the Convention stating that when a child is the grandchild of the Monarch the child automatically becomes a prince or princess. The couple was never given reasoning for why their child would get different treatment, though Prince Harry did experience conversations with family members concerning his future child’s race.

“They didn’t want him to be a prince or princess, not knowing what the gender was going to be, which would be different from protocol and that he wasn’t going to receive security,” said Markle.

One of the most shocking topics that were brought to light was Markle’s struggle with depression and suicidal thoughts. At the time of the South Africa tour in 2019, Markle’s first struggle with depression became apparent to the public eye in an interview. Markle admits that she had asked the Institution for help for a long time during the Australia tour in 2018 and did not receive any. Markle was told that she couldn’t go to seek help and that it wouldn’t be good for the Institution. She explains to Winfrey that she and Prince Harry had to go to an event and the morning of is when she had told Prince Harry she did not want to be alive anymore. Prince Harry insisted she should not go to the event and Markle replied that she did not think it would be good for her to be left alone afraid of what she could do to herself.

As Prince Harry concludes the interview, he states that the couple left because they asked for help and were not given any, showing the lack of support. By choosing to leave, the couple wanted to step back and take a breath because of their fear of history repeating itself, like in Princess Diana’s situation, along with issues involving race and social media.

“My regret is believing them when they said I would be protected,” said Markle.