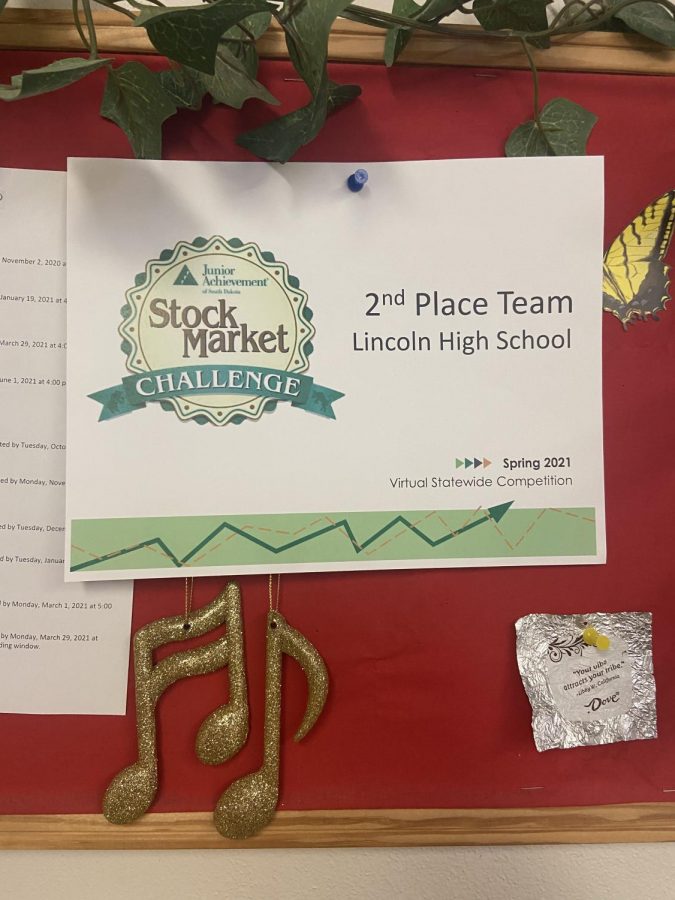 A group of talented girls in Janet Kolb’s personal finance class surpassed anyone’s wildest expectations when they collectively placed 2nd in the state stock market competition making them the first team in LHS’s history to be inducted into the national stock market competition. Brooklyn Townsend, Anna Engels and Ellie Meyer worked hard for multiple weeks in class but were not expecting the amazing outcome at the state competition.

The Junior Achievement stock market game informs students ranging from ninth to twelfth grade about investing and trading in the stock market through a brand new online app simulated to be similar to the New York Stock Exchange. The national competition will be virtual and combine teams from all over the country, including the top three  placing teams from each state competition. Together the girls went to a JA simulation where they used fake money to invest in made-up companies in which they were able to get a very high percentage of return, allowing them to place 2nd.

Townsend, a junior at LHS, was especially surprised with the results of the state stock market competition as none of the three were expecting to achieve such an accomplishment. After the fact, however, the team was elated with the turnout of the competition, feeling exuberantly proud of themselves for qualifying for the national competition.

“After talking to Mrs. Kolb and finding out no team from Lincoln has ever placed, I think it’s pretty cool and I can’t wait to see how we do at Nationals,” said Townsend.

Together the team of girls accomplished mass proportions and are looking to continue this fact when they compete next, working jointly to perform at a national level.

“Throughout the whole game we were just constantly talking and communicating, so if we continue doing that in the national competition we will do well,” said Townsend.

The team now looks to the future, competing at nationals and focusing on preparing for the competition while still considering the path methods that got them to receive second place in state.

“In class, we went over what the stock market is, and what the general idea is when buying and selling stocks. This all helped us prepare last time and we plan to stick with those same strategies as what we did before worked well,” said Townsend.

As the team awaits the final competition with high hopes and expectations, the girls look forward to the exciting experience that lies ahead of them.

“Nationals is May 19, and so far the whole thing has just been a huge learning experience and I can’t wait to see the final results after the competition,” said Townsend.