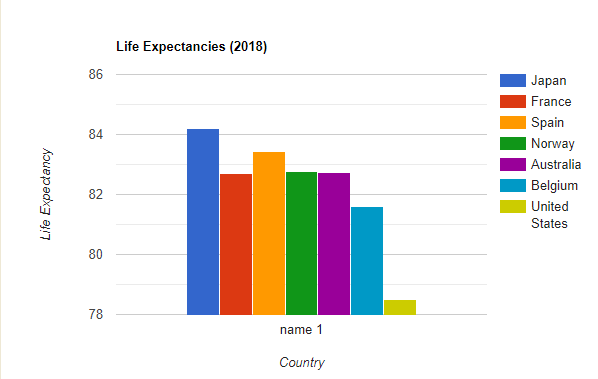 I’ve created a bar graph showing the overall life expectancies of a few developed countries compared to the U.S.

It has been known that the United States has fallen behind our fellow developed countries in many facets. When I stumbled upon Atlantic Staff Writer Derek Thompson’s article, I found a shortcoming that hasn’t been in the limelight: Lifespan.

Thompson poses the question: “Why is America so bad at keeping people alive?” And the answer is not necessarily a short one, Americans die quicker than Europeans for a lot of reasons.

Americans are more likely to be killed with a gun because America’s gun ownership rate is higher than other countries. We are also more likely to be killed in a car crash, simply because people have to drive more in America instead of walking or taking public transit. Any reason for a lower life expectancy (and more) is due to significant differences between American government, culture, etc., and Europe and other developed countries’.

Researchers have come up with three important discoveries while looking deeper into those differences. First: The life expectancy of poor and rich Europeans is very similar. This is due to their healthcare systems being usually more accessible to poorer citizens of any age. Americans tend to be required to pay around twice as much for healthcare as their counterparts, which could possibly explain why poor and rich Americans have up to a 15-year gap in life expectancy.

“Infants in the U.S. are considerably more likely to die in the poorest counties than in the richest counties,” said Thompson.

Second: Even if you’re a rich American, you’re not doing as well as rich Europeans.

30 years before COVID-19, U.S. life expectancy was surging and the white-black and rich-poor expectancy gaps were closing because of new technology and political policy. So how did we veer from that track?

Now, in the COVID years, how will we get back on the path to a healthier, more thriving society? There is no excuse why America’s people are dying more than people in other developed countries, and it is up to America to help itself live.