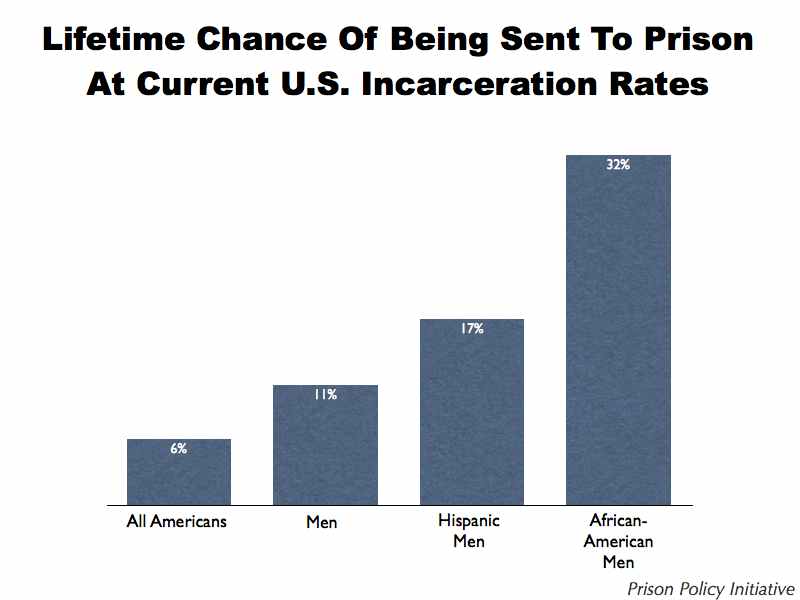 There is a place in the U.S where slavery is legal. Where a simple misunderstanding can lead to your death. Where you are practically forced into awful work conditions for pennies an hour. What’s worse is that if there is any chance of you gaining your freedom from this place, you will be constantly discriminated against and shoved down due to your stay in this hell. This place I’m speaking of, of course, is U.S. jails, and especially prisons.

The U.S. incarceration system is a joke. More than that, it’s a disgrace. There is no reason for the richest country in the world to have the worst prison conditions of all other comparable OECD nations. Additionally, the U.S. has the highest incarceration rates per capita globally, meaning that more people will be subjected to these conditions than any other country. So, how did we get to this point? Well, when I said that there was no reason for the richest country to have these conditions, I was lying. There is a reason. It’s the same unethical reason that seems to consume every facet of American systems: money.

The 13th amendment largely abolished slavery across the U.S., exept of course, as punishment. Prison labor is the greatest incentive for mass incarceration in non private prisons. UNICOR, a state owned corporation that contracts incarcerated people out to other companies, is estimated to bring in more than $500 million yearly with only 17,000 workers. Unfortunately, we do not have accurate counts of prisoners working; there hasn’t been a proper prison census since 2005. However, back then it was projected that upwards of 1.5 million inmates were working. Though this work is technically optional, prisons are still able to punish their inmates for not participating and this was the reality that inmate Dominique Morgan faced.

Morgan serves as a perfect example of how prisons repeatedly fail those they hold. Morgan faced eight years after pleading guilty for three counts of theft and forgery. The first two tears of this stay were spent in solitary confinement likely due to her sexuality, but the rest were spent working. In an interview with NPR news, Morgan shed light onto the working conditions she was subjected to. “My day would start at 4 a.m. I would go into the kitchen. I would make breakfast for 1,200 men. I would work lunch. I would work dinner. And I’d make $2.25 a day… I was diagnosed with HIV right when I got into the prison, so I would have days where I physically did not have the energy to stand and work in the kitchen for 12 hours. But I had to work. You don’t get days off. You don’t get to have sick days. And if I didn’t go to work, it was a rule violation.” It may be shocking to many people that these sorts of situations are still present and are things that people can be legally forced into. So what did Morgan have to show after her years and years of intensive labor? Just $300.

Even after prisoners serve their sentences and are seen as free by the government, finding stable work is more challenging than is justified. A particularly shocking study done by the urban institute found that eight years after imprisonment only 65% of inmates were able to find any form of employment and just 45% held jobs at the time. The reason for this increased struggle is due to many factors such as the loss of work skills. Additionally, about a third of prisoners have some physical impairment or mental condition. The truth is many employers are likely to overlook anyone with a criminal record, especially those who have been made to serve time for their crimes. A great example of this once again comes from Morgan as she explained that the very same company that she had been working for in prison denied her application for the same job she had been working for years as they did not hire convicts. To add another layer to this mountain of corruption is the fact that those who are unable to find work and live in poverty are much more likely to violate the law once again and end up in prison yet again.

Any way you slice it the current system of imprisonment we currently work under is an utter failure. The rehabilitation in these facilities is practically non-existent and the punishments are unreasonably severe. Many of us simply like to pretend that struggles prisoners are irrelevant. It’s easier to sleep at night if the hell created by our tax dollars is only inhabited by those who absolutely deserve it, but as you may have guessed, this once again is not the case.

Historically imprisonment has been disproportionately handed out to hispanic, and especially black Americans. About 33% of Americans imprisoned were black while black Americans only make up 12% of the population. The same is evident for hispanic people who make up 23% of those in prison while only making up 16% of the country. Additionally while being just as likely as other races to use illegal drugs, black people make up 40% of prisoners incarcerated for these charges.

The war on drugs in particular remains one of the most impactful reasons for our excessive prison numbers. Popularized under the presidency of Ronald Reagan and supported by both sides of the political spectrum, the war on drugs was intended to use severe sentences on users and vendors of drugs to limit the spread of drugs. Naturally, these policies were used as an excuse to imprison impoverished black and hispanic Americans. The most obvious example of this blatent discrimination is the reformation on the governments policies regarding marijuana, a drug used most commenly by these more opressed subsects of society. According to The National Institute of Drug Abuse, marijuana is a drug that causes senses of euphoria, relaxation. The drug is impossible to fatally overdose on, and is not linked to increased violent tendencies. Marijuana is also significantly less addictive compared to other drugs with only 30% of users growing dependent on this drug. However despite all this, marijuana is still considered a class b drug, on the same level as ketamine and methamphetamines, actual dangerous drugs. Even the name Marijuana has no scientific origin and was instead made to make the drug sound more forign to further justify its severe restrictions.

All of these policies and more are what makes the U.S. incarceration system so widespread and impossible to come back from. The unfortunate reality is that our prisons and jails have kept discriminatory policies and there does not seem to be any significant progress being made to repealing them. Furthermore, the ex-convicts are unable to vote for policies to improve their situations, as that right is stripped from them the second they are convicted. So, it seems the only thing left to do is empathise with those stuck in these environments, give them the voice that has been taken away.