Five memorable songs of the summer 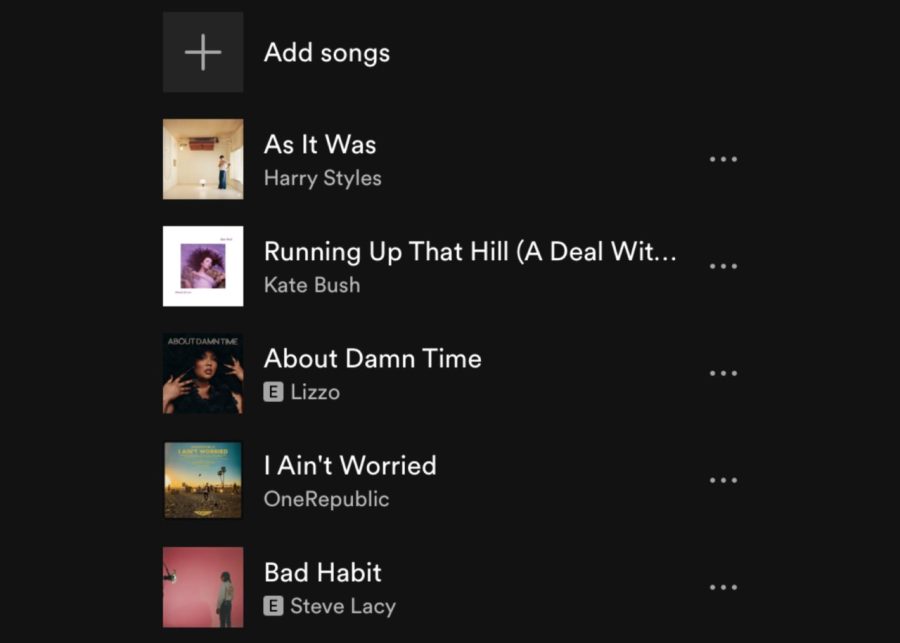 These five notable songs could be heard throughout the summer months of 2022.

As the summer comes to a close, it is the time to look back on five of the most popular songs of summer 2022.

“As It Was” by Harry Styles

This song was released in March of 2022, but its popularity continued well into the summer months and it is currently at number one on the Billboard Hot 100 list. “As It Was” is one of the more peppy songs featured in Styles’ latest album “Harry’s House” and now has over 1.2 billion streams on Spotify. Other songs from this album including “Late Night Talking” have also gained popularity.

This song was released in June of 2022 and quickly became a hit, especially on Tik Tok. “Bad Habit” includes elements of R&B and rock and also features Lacy’s stunning vocals, which tie the song together. The song’s catchy beat makes it easy to get stuck in your head. “Bad Habit” is now at number two on the Billboard Hot 100 and has over 182 million streams on Spotify, making it his most popular song.

“About Damn Time” was released in April of 2022 and it quickly became a hit, peaking at number one on the Billboard Hot 100. Lizzo has released many infectious songs over the years including “Truth Hurts” and “Juice” in 2019 and “Good as Hell” in 2016. This song follows her pattern with feel-good lyrics and an upbeat tune that is a mix between pop and disco. The song can be heard all over the radio and currently has over 374 million streams on Spotify.

4. “I Ain’t Worried” by OneRepublic

“I Ain’t Worried” was released in May of 2022 and was featured in the movie “Top Gun: Maverick,” which became one of the biggest films of the summer earning over $1.3 billion at the box office. This enthusiastic song can be heard in the movie and has a carefree energy. The whistling during the chorus of the song and uplifting lyrics about having a good time make this song a catchy and fun addition to any summer playlist.

5. “Running Up That Hill” by Kate Bush

Despite the fact that it was released in the 80’s, “Running Up That Hill” made a resurgence this summer. This song was featured in an episode in season four of Netflix’s “Stranger Things,” which was released at the end of May 2022. After it was featured in the show, the song exploded in popularity and peaked at number three on the Billboard Hot 100. The song has a truly unique sound, a mix between synth-pop and electronic music. It now has over 660 million streams on Spotify.