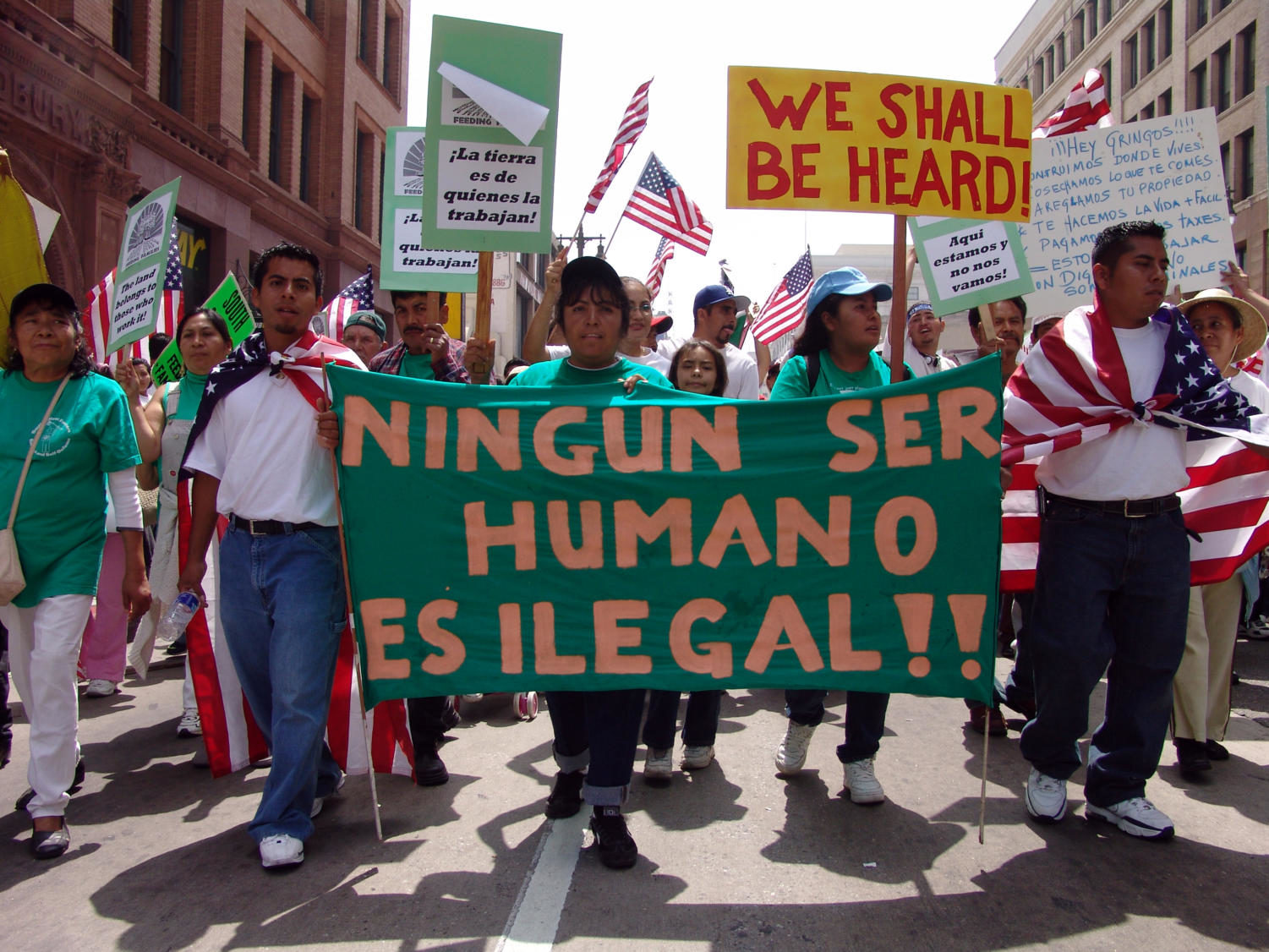 Protesters marching in the Hispanic Pride in Los Angeles

As a child, I had immigrant parents, immigrant family members and immigrant family-friends around me. At all times. Every day. Growing up in a Spanish home was dangerous at times. They are always yelling. They can be loudly complimenting the menudo, while loudly asking for the cilantro to be passed around the table. Obviously, with my conditions, I have adjusted to loud volumes, from listening to bachata music blaring in my uncle’s car to my mom yelling at my brother to take out the garbage.

However, one sound I can’t seem to shake is crying, whether the person is quietly weeping or a child throwing a tantrum, I can’t help but to think of you. I am very familiar with you and your actions.

As a child, my Guatemalan family members talked about everything. They would talk about how María gets her nails done every three weeks, but can’t keep up with her car payments, how my aunt’s young soul will get her in trouble, or  how somebody got deported while they were working. ‘La migra’ were the only words that would have the power to tone down my extremely loud parents’ booming voices. Luckily, my parents had papers. The family and friends around me did not.

Coming home, as a child, was the best part of a school day. Being a first-grader was pretty darn tiring. So, coming home was a highlight. Plus, 95 percent of the time, we had guests. During my childhood, I had always been a great impersonator of,“Lupita,” my all-time favorite character of the Spanish soap opera, “Rebelde;” therefore, this was the perfect excuse to put on my “Elite Way School” uniform and showcase my talent. It was April, 27, 2006. The 27th was a Thursday and Thursday meant library day so I was excited to show my mom my new findings. I launched myself out of the bus, walked into the house and my young mind immediately was trying to understand what was going on in my living room.

As a child, I saw my mom with three children, who I had only ever seen full of life, crying in her arms, as their mom was placed in handcuffs by you. In handcuffs. As if she were a threat to herself or her children or anyone around her. Like a criminal. I remember thinking of every time that woman put me to bed, every time that woman danced in the kitchen with my mother while cooking dinner. I thought of all the times that woman had been a positive and uplifting influence, and they were all erased by the intense image of her in handcuffs.

You removed those children from their mother. Without any remorse. You showed up and instead of asking her to turn down the music, you heard the broken English and commanded her to hand over her non-existent papers.

The day were I could no longer handle a weep, was the day, that as a child, I knew I needed to speak. Speak for the undocumented immigrants who couldn’t speak because of fear. Immigrants leaving their native land, somewhere where they find themselves comfortable, to find better opportunities and fulfill their American Dream.

Migra, you changed me. I saw a side, that as a child, was scaring. However, yet again, my family is lucky. I am not Roberto, Mya or Eddie. My mom wasn’t taken from me. I didn’t  have to relocate to Missouri so I can live with an uncle that I had only met once. I didn’t have to enter the foster care system because the uncle I had finally become comfortable living with was becoming more and more abusive. Roberto, Mya and Eddie have since then moved to Texas to live with their mom’s cousin who was willing to adopt them all. They, finally, got lucky. But you broke them. They will always remember you.

Migra, as a child, you made me realized how lucky I am. As a child, you made me realize that not everyone is as lucky as I am and because of that, fighting for minorities is a strong passion of mine. So, migra, I write this letter to tell you thank you. Thank you for making me who I am today. The thought of your supporters who don’t mind the fact that families are being seperated is fearsome and, as a teenager, I don’t want to live in a fearsome world. Please reconsider your priorities. I beg, immigrants aren’t aliens. They are people wanting better for themselves and their families. Hearing the stories of you losing over 1,000 of the 7,000 children you were deporting makes me wonder if you really think that you should be in charge of them.  Hearing the tear gas stories, hearing you put children in court with no parent involved, hearing you put them in cages, hearing you isolate them from humanity makes me want to fight even more. ICE, you need to clean up your act and realize that, people like me, are fed up. People like me are done with no apologies of your horrendous actions. Either you change, or we get louder.

The story contained minor grammatical errors. This has been fixed.