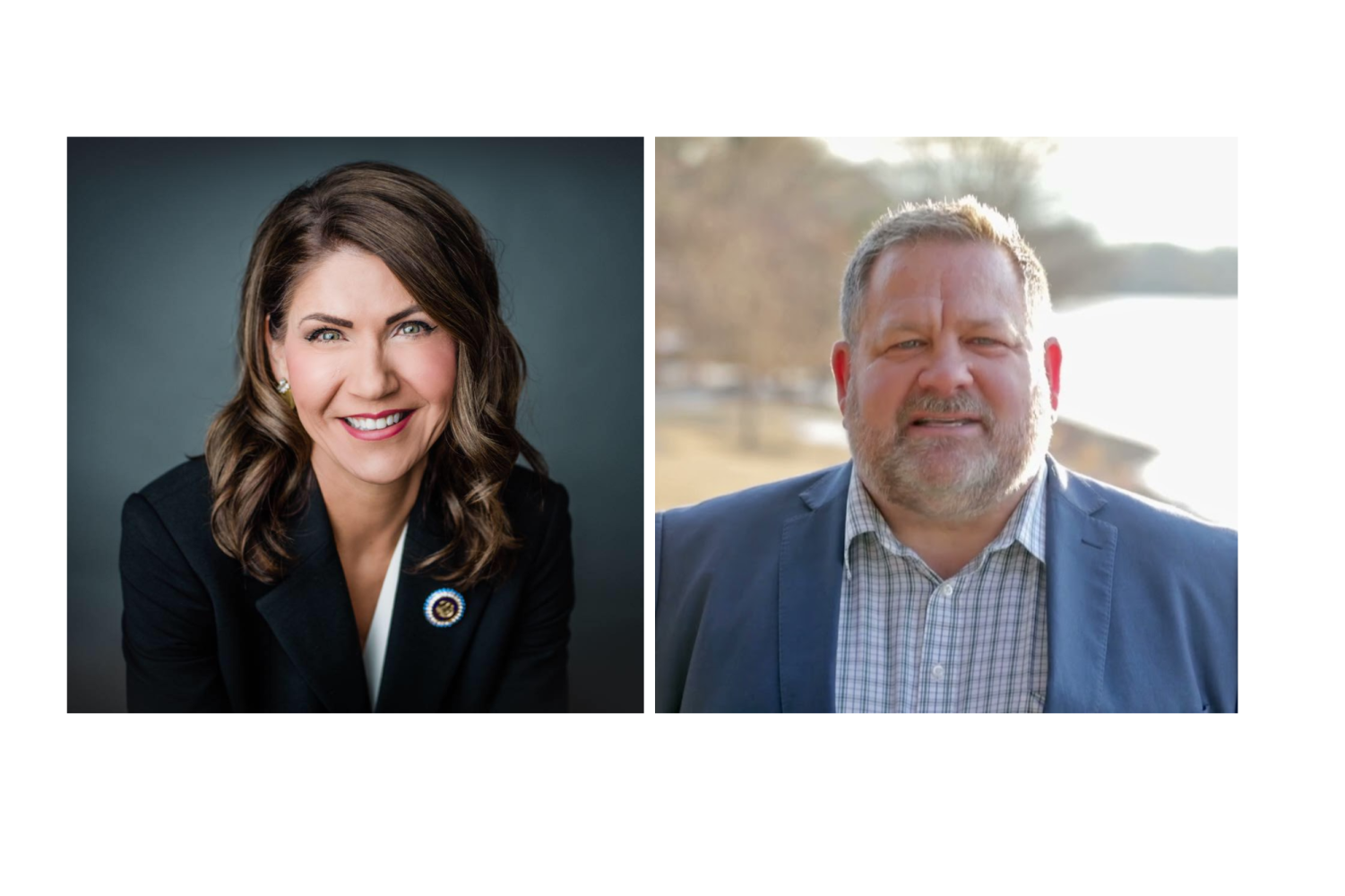 Used with Permission by Wikipedia/Office of the Governor, South Dakota/YouTube/Smith for Governor 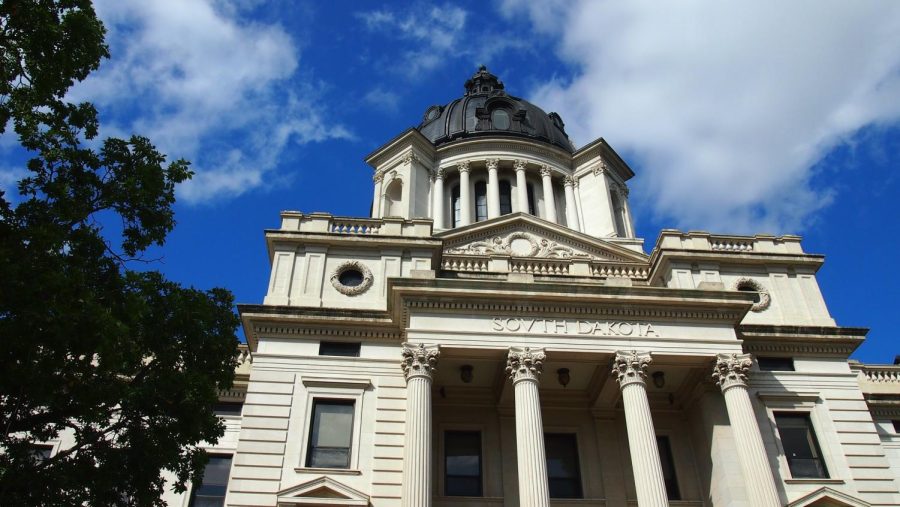 Used with Permission by Flickr/Samir Luther

The South Dakota state capitol building is in Pierre, South Dakota and serves as the governor’s main workplace.

It is almost Nov. of 2022, which means the official election for the next South Dakota Governor is right around the corner.

This year’s gubernatorial race is tight between two candidates for governor; incumbent Governor Kristi Noem and Minority leader of South Dakota’s House of Representatives, Jamie Smith. Early access voting began Sept. 23 and ended Oct. 24 and the official election day is Nov. 8. As of Oct. 11, Incumbent governor Noem had a 4% lead over Senator Smith in the pre-election polls. According to Argus Leader, Noem’s campaign raised $3.1 million and Smith’s campaign raised $955,000.

Smith has been a House Minority Leader since the 2019 legislative season, he speaks for the Democratic party of South Dakota. He represents District 15, which covers parts of downtown Sioux Falls; which includes areas of Terrace Park and the Great Plains Zoo. He is a former SD real estate agent with Hegg Realtors and a former educator. Smith has spent six years in the state legislature. His campaign is focused on affordable housing, high-quality education and healthcare as well as an economy that works for everyone. Smith supports exemptions to South Dakota’s abortion ban in cases that involve rape and incest.

Smith spends time working and developing his relationship with the Native American population of South Dakota. On Native American Day, Oct. 10, Smith went to native country out west and met with local natives and officials. Smith has put $810,000 into his election campaign, and most of his money for his campaign has come from public donations. Just recently his campaign is being investigated for violations of financing laws.

Noem is the current governor of South Dakota and is running for reelection. She is a part of the Republican Party. Noem is a Watertown, South Dakota native. Noem was the first female governor elected in the state of South Dakota. She is a pro-life supporter and supports ending abortion in South Dakota. Noem has said that she wants to “crack down on abortion providers in South Dakota.” During the COVID-19 pandemic, she did not enforce social distancing or the use of masks to prevent the spread of the airborne disease. Noem has spent $4.7 million on her reelection campaign. In her 2022 reelection campaign, she aims to end sales tax on groceries and continue her stance on abortion.

In Noem’s tenure as the Governor of South Dakota, she made waves. Noem declined a statewide mask mandate in 2020 despite the words of medical experts. In 2019, she signed a bill into law terminating South Dakota’s permit requirement to carry a concealed handgun. Noem spent $500,000 of public funds on her “Meth. We’re on it” campaign. The campaign was met with controversy and harsh public words. It was mocked by millions, and it made national news headlines around the country. In the early months of 2022, Noem placed heavy eyes on the department of corrections and hired Kellie Wasko as the new Secretary of Corrections after a sexual harassment scandal in the workplace with the former corrections secretary Mike Leidhal. Leidhal retired in 2020 because of the scandal and ongoing investigation of sexual harassment inside the state’s penitentiary. Recently she spent $68,000 dollars of taxpayers’ money on updates to the Governor’s mansion including adding a sauna, new chandeliers along with imported rugs from India.

As the 2022 Gubernatorial race comes down to the last couple weeks of the election pandemonium, these are some of the issues and events behind the candidates for South Dakota’s next governor. The Gubernatorial election will be held on Nov. 8 of 2022 with results coming in on the early hours of Nov. 9.

Noem: Extending her stay in Pierre 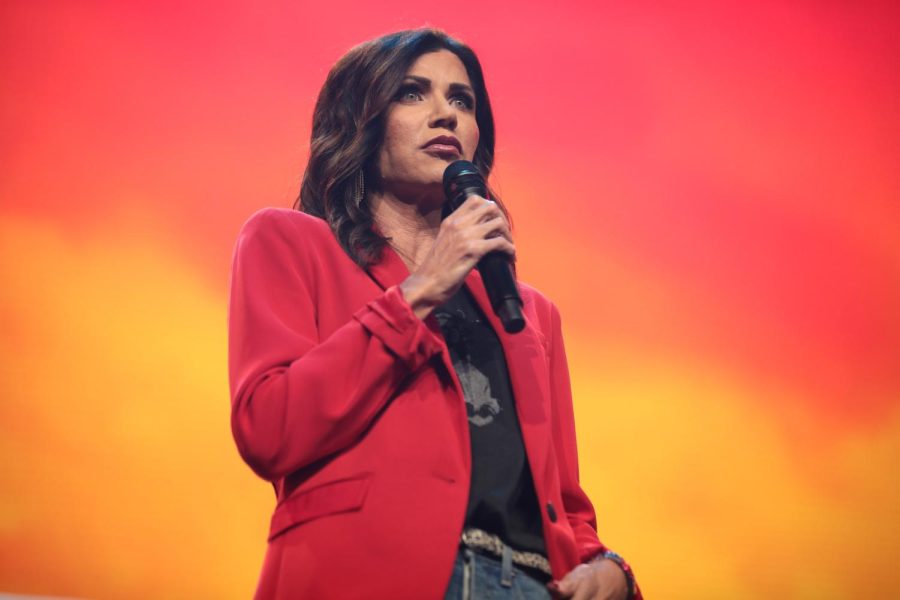 Used with Permission by Flickr/Gage Skidmore

Kristi Noem received 62% of the vote in the 2022 midterm election.

The South Dakota polls are closed, and the results have been confirmed; Incumbent South Dakota Governor Kristi Noem has won again.

With results coming in late on the evening of Nov. 8, the successful reelection campaign of Noem has delivered, and she will be entering her second term as South Dakota’s Governor. Governor Noem will be spending a second term in the state capital of Pierre and will be sworn in for her second term on Jan. 7, 2023. The Argus Leader is tabbing her win as “decisive” and “winning by a large margin.” While Fox News is calling it a “landslide of a victory.”

Incumbent Governor Noem is a representative for the Republican party. She was the first female to be elected as governor in South Dakota. Her reelection campaign could be called wildly successful as the $4.7 million she raised and spent on the campaign played out in her favor. What she aims to focus on in her second term will center around replacing the grocery sales tax, continuing her anti-critical race theory stance in education and the “open for business” mentality that South Dakota has regarding the COVID-19 Pandemic. Noem has also noted that President Biden’s policies are contributing to higher inflation, which is directly affecting South Dakota families negatively, which Noem has actively tried to prevent.

The official election results show that Governor Noem won 63.7% of the state, while Democratic nominee Jamie Smith won 35.2% of the state. In Noem’s Victory speech, she referred to her win as an “example to the rest of the country” as to how the state of South Dakota shines a light on “freedom and opportunity.” Senator Smith thanked everyone that voted and reassured citizens that the future is full of opportunities.

“As I leave this stage tonight, I leave you with my deepest gratitude and certainty that the future is bright,” said Smith.

When asked about how Noem sees the future of South Dakota, she responded with “Americans are looking across the country, they are looking to South Dakota as a shining city on a hill.”

Governor Noem ended her victory speech with key points to reassure the citizens of South Dakota that she will do her best for the people.

“In the last four years we have built the strongest state in the nation…we did it together…I promise you the best is yet to come,” said Governor Noem in her victory speech.