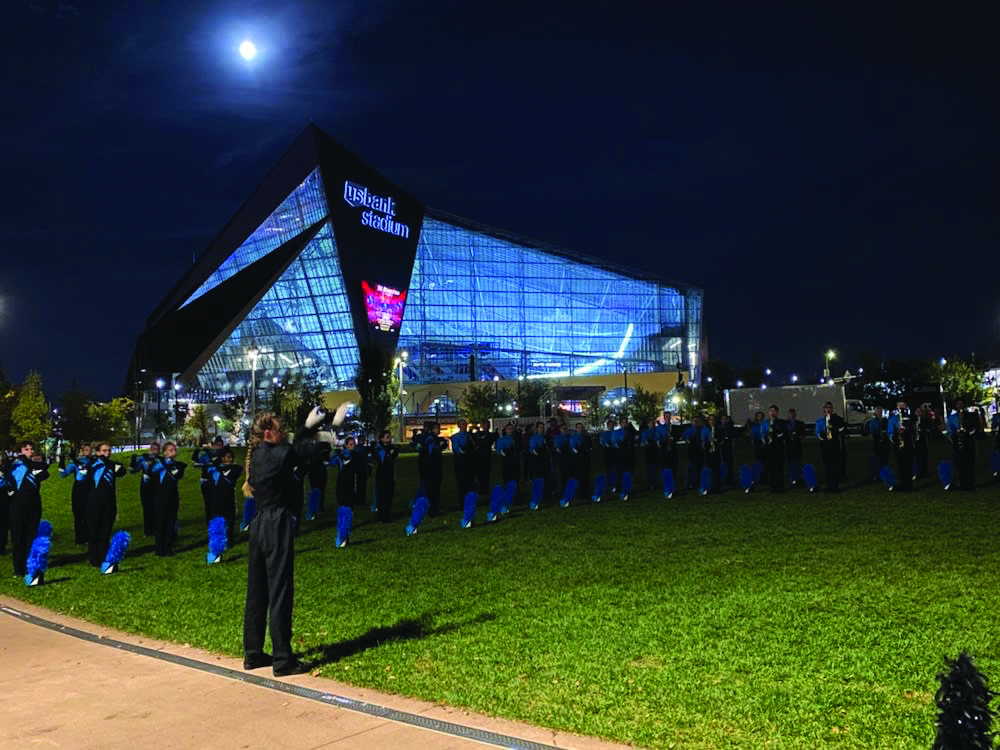 The LHS Marching band performed numerous times across the Midwest, including at Youth In Music at the US Bank Stadium in Minneapolis, Minnesota. (Used with Permission by LHS Marching Band Parents)

The LHS Marching band performed numerous times across the Midwest, including at Youth In Music at the US Bank Stadium in Minneapolis, Minnesota. 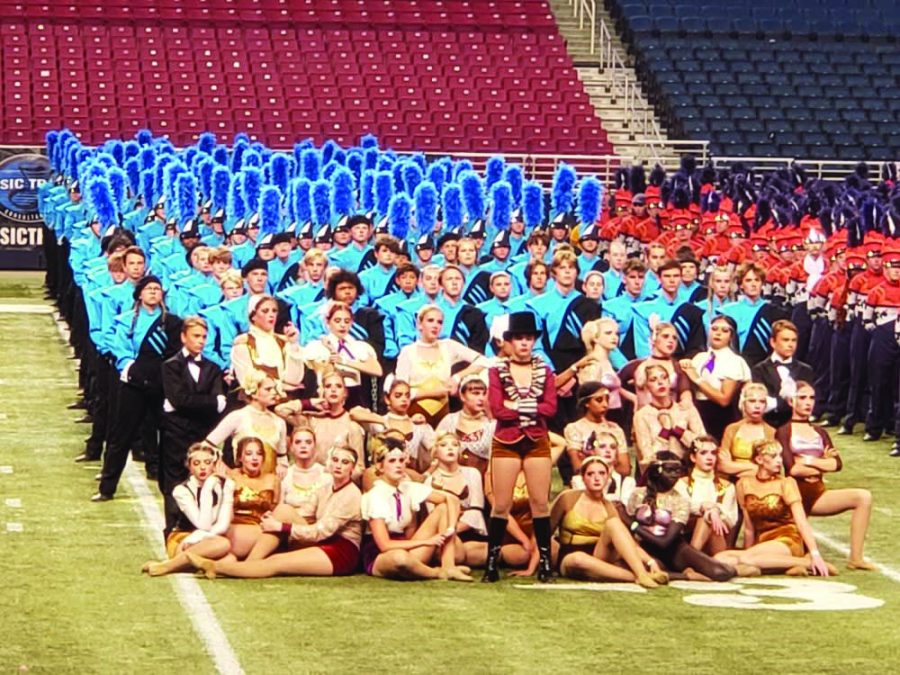 Finalists bands are pulled onto the field for a full retreat.

This season was a long one for the LHS Marching Band, as they made history at each competition they attended. As the marching season comes to a close, a recap of competitions is necessary and overdue.

The band kicked off their season with the field show “Houdini: Unchained” on Sept. 17, where they attended the Pursuit of Excellence competition in Marshall, MN. The band rode back into town as the champions of this competition. Every weekend that followed was packed with performances, both in competition and exhibition. The following Saturday was a big day for the band, as they made history on the field at the Bands of America (BOA) Iowa Regional Championship. This is one of the biggest competitions a high school can attend, and historically had never been won by a band from South Dakota. That is, until Sept. 24, 2022.

“I knew we had the potential [to win BOA], but we didn’t really know how things would shake out,” said Daniel Carlson, LHS Marching Band’s head director.

The band performed first in preliminary performance at 11:45 a.m. and last in finals at 10:15 p.m. All in all, this day was a long one for the Marching Patriots. They had left town at 4 a.m. that morning and did not return until 5 a.m. on Sunday. Despite this, LHS took first place in their competitive class in preliminary performance, and other awards presented included outstanding general effect, outstanding musical performance and outstanding visual performance. The band made history for the entire state by being the first group from SD to win a BOA competition. This year, 15 bands attended this competition in Waukee — some hailing from Nebraska, Iowa, Minnesota and Kansas. The closest the LHS Marching Band had ever come to winning the Iowa Regional was 37 years ago in 1985, where the band came in second place.

“This [level of achievement] is about what I was expecting for the band, it’s been pretty awesome,” said Drew Balta, the new assistant band director. 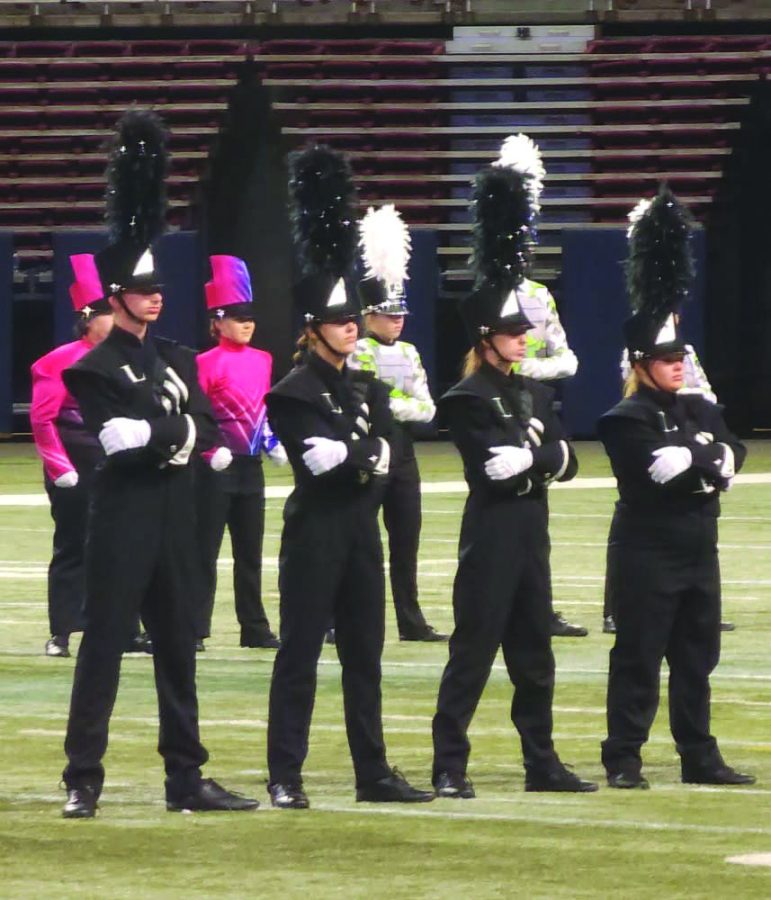 The Drum Majors were welcomed onto the field to accept awards, which include Clark Egland, Claire McDermott, Lily Ralston-Perreault and Emma Weisz.

The next weekend, the band co-hosted a competition of their own in Sioux Falls, entitled Festival of Bands. Other hosts included the sounds of JHS, RHS, WHS and OGHS. The morning started off with a parade where 25 bands were judged for their street marching, interluded and followed by the hosts and USD’s band in exhibition. The bands carried onto Howard Wood Field for competition, where LHS performed their field show in exhibition as the final adieu.

Next, the Marching Patriots moved onto Youth in Music, a competition held in Minneapolis, MN. This event also doubled as the MN State championship. The band woke up early for this trip as well, departing the school at 6 a.m. and once again not arriving home until 4 a.m. the next day. They performed in preliminary competition at 3:15 p.m., and their finals performance was at 10 p.m. The band was also joined in competition with their closest companions and rivals, BVHS. While this event was the MN state championship, LHS took second place, followed by BVHS in third. Other awards presented included outstanding guard and outstanding horn line. Rosemount High School was the champion of this competition, but it was a close call. Rosemount, who has been one of the LHS’ biggest competitors since 2009, came in first place with a final score of 88.2. LHS came in second with 87.6, followed by BVHS with 85.0. The 0.6 point difference gave the LHS band confidence for their next event.

“I mean, I think people are gonna have pretty high expectations [after a win]. Every time you succeed, their expectations go up, and it’s hard to maintain success,” said Carlson.

“Every time you succeed, their expectations go up, and it’s hard to maintain success.””

Finally, the BOA Super Regional Championship was the last event in LHS’ competitive season. This event is held in St. Louis, MO. The trip was made entirely in charter buses, and the drive was split across two days. The band left school early on Thursday, boarding the buses at 2:20 p.m. They had a three hour rehearsal Friday morning in Blue Valley High School’s stadium in Stilwell, KS. The time on the field was lent to the Patriots by the school’s directors. After this, the band continued on to St. Louis, arriving at the Dome at America’s Center at 6:40 p.m. to watch and cheer on two of their competitors. On Saturday, the band performed in preliminary competition at 9:15 a.m. and left the stadium for a lunch break. Upon their return, they watched the remaining competitors and anxiously awaited for results of their performance.

“I’ve never been to BOA before. [Regionals] was my first event, so it was a night that I’ll remember forever. Watching [the band’s] reaction was pretty awesome, that was the highlight for me,” said Balta.

The top 14 bands that moved onto finals were announced in no particular order, but LHS was the 13th band to be announced. After a collective sigh of relief and a quick celebration, the band prepared itself for its last performance on a field. A large meal and several pep talks were in order for the Marching Patriots, which many spent with their closest friends in the activity. Many seniors gave somber and encouraging speeches before the warm-up, and the band returned to the field for the last time. They stepped off for their last competition at 9:30 p.m. that night, and were quickly turned back onto the field for a “full retreat.”

“[The Lincoln band is] really special and it’s been a lot of fun to get to be a part of this culture,” said Balta.

During the awards ceremony, all members of the finalist bands are welcomed onto the field in a large block to await placement announcements. The band’s placement was similar to the Regional BOA, as it made history for not just the school, but the entire state. Placing fourth may not sound like a lot to some bands but for the Marching Patriots, this was a new record. LHS is the first SD band to ever make the top five in the Super Regional contest. The band has attended this event a total of eight times, only four of which they have made finals. The 2022 season was also the only time the Patriots had been in BOA finals two seasons in a row. The 2021 show, entitled “Queen’s Gambit,” had placed 11th in Super Regional finals, which was LHS’ previously highest ranked performance. The 2022 show now has the honor of being the best recorded show in LHS band history.

“It’s pretty awesome [to make history]. It’s hard to do, so it’s pretty cool to do it,” said Carlson.