Wild-card week for the books

Wild-card week for the books 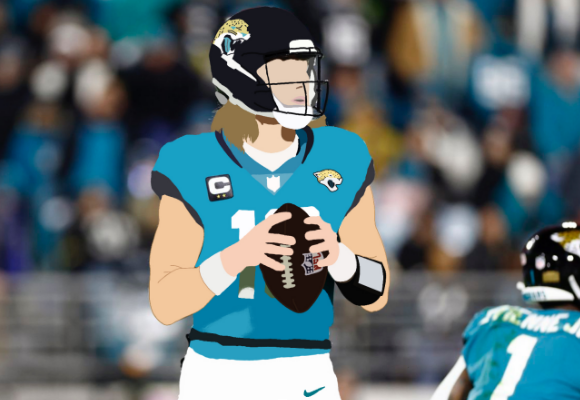 Throughout the wild card games, we saw the third-largest postseason comeback, a major upset and two huge favorites almost lose on their home field.

The first weekend of the league’s postseason lived up to its name, with no shortage of exciting games. The Jan. 14-16 wild-card weekend consisted of six games: Jaguars vs Chargers, Ravens vs Bengals, Bills vs. Dolphins, 49ers vs. Seahawks, Vikings vs Giants and Cowboys vs Buccaneers.

The 49ers took home a win of 41-23 this week. The Seahawks jumped out at the start of the game with a 17-16 lead at halftime; however, after a first-half scare, San Francisco broke the game open with a very impressive performance that would continue for the rest of the second half. Charles Omenihu stripped Geno Smith in the third quarter to have the biggest play of the game. With the 49ers leading 23-17, the Seahawks drove down to San Francisco’s 19-yard line, but Omenihu’s strip-sack killed the drive and from there the 49ers just kept dominating. Brock Purdy became the first rookie in NFL history to total four touchdowns in a playoff game. Purdy finished the game with 332 yards thrown.

The Jaguars beat the Chargers with a close-end score of 31-30. The Jaguars won this game by pulling off one of the biggest comebacks in NFL history. The Jags fell behind, 27-0, early in the game due to Trevor Lawrence tripping over his own feet and coming out of the gate with four interceptions in the first half. The Jaguars QB recovered to also throw four touchdowns as the Jags shocked the Chargers at the end of the game with a field goal to pull off the astonishing win.

The Dolphins went into this game as the biggest underdog in the history of the wild-card round. Even with these poor odds the Dolphins went into the game and were able to put a scare into the Bills. The Bills won this game against the Dolphins 34-31, but the Dolphins made it anything but easy for them. Josh Allen was one of the reasons the bills were able to stave off the upset due to his 352 passing yards and three touchdowns. Along with that, the Bills had a defense that came up with multiple big plays, including two turnovers, four sacks and a fourth-down stop that iced the game with just 2:30 left to play.

The Minnesota Vikings had a sorrowful wild-card weekend after giving away an upset at their home field to the New York Giants. The win over Minnesota marked the Giants’ first playoff victory since they beat the Patriots in Super Bowl XLVI back in February 2012. Daniel Jones had a historical performance to pull off this win. He became the first QB in NFL playoff history to throw for at least 302 touchdowns while also adding at least 70 yards on the ground. Jones didn’t just stop with a throw for 301 yards, but he also was the game’s leading rusher with 78 yards on 17 carries. Giants fans went home joyful with a 31-24 victory.

One turnover cost the Ravens this wild-card win. Although the Ravens had Cincinnati on the ropes for most of this game, the Bengals were able to escape with a win of 24-17. They can thank this win to their defense. Who were able to come up with one of the biggest plays in NFL postseason history. With the Ravens at Cincinnati’s one-yard line early in the fourth quarter, Tyler Huntley fumbled and Sam Hubbard returned that fumble 98 yards for what ended up being the game-winning touchdown. Huntley had a rather impressive game looking past the overturn with 280 total yards and two touchdown passes.

So much for notion that Dak Prescott and the Dallas Cowboys might not be up to the challenge of beating Tom Brady. The last game of the wild-card weekend ended with the Cowboys blowing out the Buccaneers with a score of 31-14. Dallas Cowboys QB, Prescott, played his best game in weeks, throwing for four touchdowns and running for another. About the only negative for the Cowboys was kicker Brett Maher missing his first four extra points, becoming the first player in NFL history to miss that many in a game.

Good luck to all of the teams that will advance into the next week of the post-season! 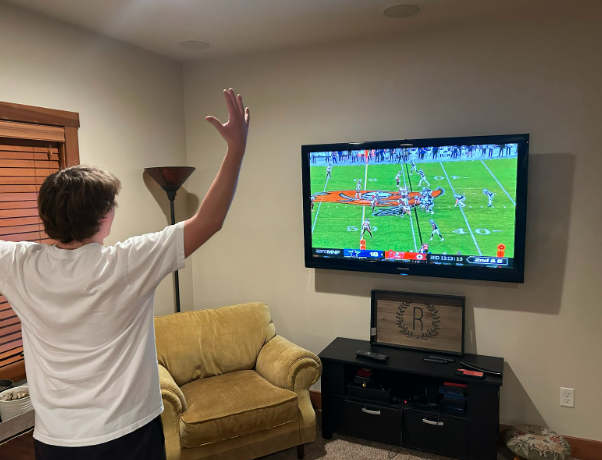 The Buccaneers were trailing the Cowboys on Monday night at the beginning of the first half.

The NFL Wildcard weekend has come to an end which sends the league one step closer to the Super Bowl. The AFC’s wildcard matchups ended up between the Los Angeles Chargers and the Jacksonville Jaguars. This conference’s next matchup put two AFC east teams against each other with the Buffalo Bills and the Miami Dolphins. The final AFC matchup on Sunday was between the AFC north winner, the Cincinnati Bengals, up against their division rival: the Baltimore Ravens. The NFC’s wildcard matchups started off on Saturday with the Seattle Seahawks and the San Francisco 49ers. Sunday had an NFC matchup between the Minnesota Vikings and the New York Giants. Finally, Monday night’s matchup was between the Tampa Bay Buccaneers and the Dallas Cowboys.

With the matchup between the Miami Dolphins and the Buffalo Bills. And finally, the Los Angeles Chargers went head-to-head with the Jacksonville Jaguars. The NFC’s matchups included the New York Giants versus the NFC north division winners, the Minnesota Vikings. Furthermore, the Seattle Seahawks were pitted against the San Francisco 49ers.

The Saturday matchups started with the Seahawks and the 49ers which was an interdivisional matchup with the 49ers being the division winners and the Seahawks who barely squeezed into the playoffs on a 9-8 record. It was very doubtful whether the Seahawks stood a chance against their rivals, especially having lost twice to them in the regular season. That said, San Francisco continued with the trend as they defeated Seattle by a commanding lead of 18. Led by Mr. irrelevant, Brock Purdy threw for over 300 yards and three touchdowns, helping the 49ers to advance to the divisional round with a 41-23 final score.

The final Saturday matchup was between the Jaguars and the Chargers which looked as if it was a decided game by the second quarter as the Chargers had a 27-3 over the Jags heading into halftime. However, the Jaguars made history with the third-biggest comeback in NFL playoff history as Trevor Lawrence led Jacksonville to a 30-31 victory over Los Angeles. Though not the prettiest win for Lawrence as he threw 4 interceptions, the rookie managed to send his team to the divisional round.

Sunday’s matchups started with another divisional matchup between the Buffalo Bills and the Miami Dolphins which was a back-and-forth battle after the Bills shut out Miami in the first half. The Dolphins, without their first or second-string quarterbacks, were less than 50 percent in completions. The Miami season was unfortunately made much more difficult due to many complications from injuries. With the Bills’ strong roster, they will be a force in the continuing playoff games. However, they will need to break their curse of losing in the playoffs.

The following matchup was between the Minnesota Vikings and the New York Giants. The Vikings’ offense has thrived all year off of Justin Jefferson’s amazing route running and catching ability which was not present in this game. With only 47 receiving yards from Jefferson, Minnesota did not have their first option dialed throughout the game. Not only this, the Vikings were unable to stop their opponents in the receiving game or in the backfield, a huge driving factor in this 31-24 Vikings defeat.

Sunday’s last matchup was between the Baltimore Ravens and the Cincinnati Bengals. These two teams had played each other in the previous week where the Bengals defeated the Ravens 27-16. This wildcard matchup was not much different than their week 18 game. This was a sloppy game for the Ravens as they could not seem to capitalize on third down with only three of 11 of their first down plays being successful in moving the chains. This was a defensive battle that decided the game as the Bengals acquired an interception and a 98-yard fumble recovery which was taken to the house by Cincinnati defensive end Sam Hubbard.

Monday’s matchup was between the Dallas Cowboys and the Tampa Bay Buccaneers. This game was a beatdown from the Dallas Cowboys as they scored 24 unanswered points through the third quarter. It was only until the final seconds of the third quarter in which the Buccaneers were able to finally score a touchdown with an end zone pass to Julio Jones. The Cowboys offense was able to run and throw all over their opponents with ease. The final score ended up at 31-14 in favor of the Cowboys. Heading into the following round, the Cowboys will need to dial in their special teams as their kicker missed four of his five extra points on Monday night.

Fans should make sure to tune in this weekend to the divisional round of the NFL playoffs as each team is fighting for a spot in the NFC and AFC championships. On Saturday, the Chiefs will be playing the Jaguars and the Giants are matched up against the Eagles. The following matchups this Sunday are between the Bengals and the Bills as well as the Cowboys who will face the 49ers.

Thank you for your donation!